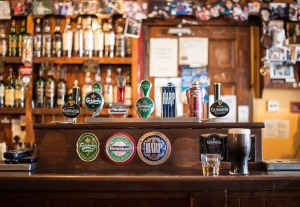 Not my joke, but it’s funny. And you marketers out there probably even snickered a little bit and perhaps have the urge to read on.

Does humor have a place in your content marketing? Using humor can help humanize your brand, create greater recall, and improve engagement.

Three years ago, the CIA sent out its first tweet. And guess what? It helped drive interest and followers.

Some questioned if the CIA should be funny, but in the end that tweet (and others that followed) accomplished what was intended: it engaged an audience. They tweet on more serious topics now, and they have the reach they were after (almost 2 million followers as of this writing!).

Does humor help you sell more? There are many mixed views on this. It turns out humor can help. Recall for funny and relevant ads is greater than for those without. My takeaway from the various studies I read is that if the content is important to the viewer,  humor only makes it better. That means that humor on its own won’t make for a better ad or post. Once again, the headline is that RELEVANT content is key.

Consumers definitely remember funny ads and share those ads more on social media, so if you create one that works, you’ll be able to get some serious mileage from it.

Kmart’s Ship my Pants ad quickly exceeded 20 million views when its edgy, humorous approach went viral. And they quickly followed up with Big Gas Savings, another hilarious ad. The jury is out however regarding whether or not Ship my Pants created enough awareness of Kmart’s shipping service. Their goal was to move consumers from shopping at their brick and mortar stores to the much better experience of shopping with them online. I couldn’t find anything supporting that it helped sales, but it sure created a lot of buzz around a dying brand.

There is no question that humorous ads are viewed more and shared. Humor attracts attention, something all advertisers want. The Kmart examples above are a great example. Same for the CIA first tweet. Humor can engage, but it has to be really good to make the brand memorable.

Remember though: humor is hard. Humor translates differently with different audiences. As with all good marketing, understanding your audience and goals is the place to start. Your humor can work, but it has to be relevant to your audience and support your campaign goals.

Not everyone agrees with the use of humor, even where it may be appropriate. Derek Thompson wrote in the Atlantic Monthly

“Ultimately, however, the sheer amount of the research into humor in advertising is another data point to tell us what we already know, which is that nobody has any clue what sort of advertising works until it works. “

As a boss, you have a great deal of influence over the lives of your employees. You control the paycheck after all. We’ve all had good bosses and bad ones, some who gave great advice, and some, not so much. The good news is, you can learn a ton from both good and bad bosses and can use both to become a better and more effective leader and mentor yourself. Some of this advice comes in the form of watching how someone handles a situation and some comes in the form of direct feedback.

Good Advice. If you exude confidence, everyone will think you know what you are talking about (Tweet this). I’ve also heard this described as “own it.” And it is good advice. It doesn’t mean you should emphatically state things you know not to be true, but it does mean speaking with authority on topics where you know your stuff. I believe Sheryl Sandberg calls this ‘Leaning In.’ http://www.amazon.com/Lean-In-Women-Work-Will/dp/0385349947

Bad Advice. Only hire people who are married. Seriously, a boss actually said that to me. His reasoning was that married people were more stable. Oh boy.

Good Advice. When you are talking to an employee (or anyone), give them your undivided attention. That means, don’t look at or answer your phone, check your email or look over their shoulder. Being distracted sends one message: the person you are talking to isn’t as important as you are.

Bad Advice. Always have something to say in a meeting. I had a boss who would comment in a long-winded fashion in every meeting, regardless of whether or not what he was saying added to the discussion. Folks hated to be in a room with him because meetings would last twice as long as necessary. He would say to me, you can’t just sit in a meeting and not contribute. On the face of it I felt he was right. After all, why was I in a meeting if I didn’t have anything to contribute? But, if I didn’t have something new to add, I believed (and still do) that saying something just to say it, was not productive. Just because I’m not talking, doesn’t mean I’m not observing, absorbing and processing. Let’s face it, when you’re talking, you’re not listening. Someone came up to me after a management meeting once and said “Sue, you don’t say much, but when you do I pay attention, because I know what you’re saying will be important.” I took that as a compliment!

Good Advice. The difference in response rates between .051% and .057% is really small. Yes, it represents over a 10% difference, but unless you’re evaluating a ton of responses, it really doesn’t matter. It’s a big data problem. It’s hard sometimes to know what’s important.

Bad Advice. Say whatever you need to say to get what you want (from a client, boss, employee, customer). Basically, lie. This might help you in the moment, but is just not a good long-term strategy. And once you’re busted, it’s hard to gain that trust back. Here’s my list of most egregious whoppers that were said either directly to me or to someone else in the room with the express purpose of misleading:

Good Advice. An employee should never be surprised about what they hear in a performance review. Ongoing feedback is far more valuable than once a year feedback. It’s important to learn how to have these discussions.

Bad Advice. Every penny counts. On the surface, this might seem like good advice, but let me explain the context. I worked in Marketing for a company where we did a financial review every month.

One month my balance sheet was off by one cent. I was grilled for two hours, in front of my co-workers, about that cent.  I’m not making this up. There are times when it makes sense <cents> to let the little things go.

Good Advice. If you make a mistake, learn from it so that you don’t repeat it, but don’t continue to beat yourself up (or let others beat you up).  I once made a $250,000 mistake. I had printed a piece (millions of pieces) with what I thought was approved language, only to be informed by the partner that it was in fact, not approved. With my tail between my legs, I went into my boss’ office and confessed my error. He said “Sue, you know you’re someone when you can make a $250,000 mistake.” That was all he said. I was prepared to be humiliated, beaten, fired, but instead, my boss made me feel like the world wasn’t coming to an end. He knew that I already felt badly enough and chose not to make me feel worse. As it turned out, I was able to work with the partner and they eventually let us use the piece, so money loss averted!

Bad Advice. Devaluing an employee gives you control over them. Okay, so I wasn’t directly given this advice. Here’s what happened. I was a new hire for a large, well-known company. My first day on the job was a business trip for a big and important client event. I flew across the country and showed up where I was supposed to, knowing no one but my new boss, and with no information regarding what was expected of me.  I assumed I’d be debriefed once I arrived. I wasn’t. At the first event, I recognized my boss greeting folks as they entered the room. I enthusiastically walked up and extended my hand. She gave me a (very) brief hello and was onto the next person in line. No introductions to others standing at the door, no ‘happy to have you here,’ no ‘welcome to our company.’ It was weird. And it got worse. I walked into the ballroom, not knowing a soul and not knowing what my role in the room even was. I moseyed over to the bar and tried to look like I belonged. Eventually, a young woman approached me and asked who I was. It turned out that my boss hadn’t actually told anyone that I’d be at the meeting, or in fact that I’d even been hired. She had even neglected to tell one of the direct reports who’d applied for my position, that he hadn’t gotten it.  It was a harbinger for things to come and I only stayed a year in that job.

Good Advice. Know enough about what’s going on in your employees’ lives to have compassion…but don’t overdo it. In other words, don’t try to be Mom or Dad, but know enough so that you understand why someone might be having a rough week at work, or why a hearty congratulations might be in order.

Bad Advice. If you are running a meeting, always sit at the head of the table. I’ve always believed that if you want to foster more of a team approach, you should sit with the team. Always sitting at the head of the table means you are isolating yourself by never having anyone seated next to you. Employees feel special when they can sit next to the boss. You can still keep control of the meeting from a seat at the table that’s not at the head.

What are some of your good advice/bad advice stories?